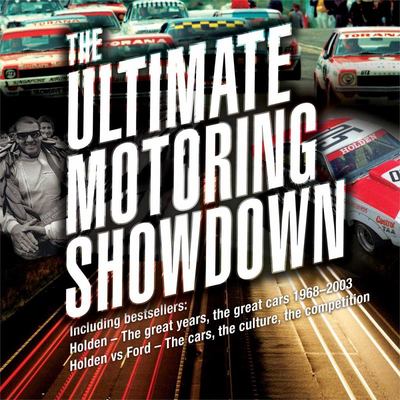 A collection of two of the best-selling motoring books published, Holden versus Ford and Holden. Both books are packaged together for the first time. Holden versus Ford, Ford versus Holden, Red versus Blue, Blue versus Red, even the order in which you say these two precious words marks you for life as to which side of the white line you drive on.   Holden captures the essence of these three great cars -- Commodore, Torana and Monaro, their muscle, their romance, their engineering -- as well as their glory days round the Bathurst roads.   Going straight to the heart of what it means to be Australian, this special car bind is a must-have addition to any Ford or Holden lover's bookshelf.  Loyalty, faith, competition, love - is expressed through two brands of motor car.   ...Show more

An Australian book that celebrates the proud history of our unique Australian made Ford, Holden and Chrysler muscle car heritage. Wild legendary stories of 100 famous and infamous events and stunts that have amazed and entertained muscle car fanatics over the years. Muscle Car Mania recalls every aspect of Australian motoring, dating back to early last century, from beach sprints to the formation of Speedway hot rods, the Summernats and Around Australia rallies. Features pictures and stories of some of the country's finest Fords, Holden's and other muscle car icons from Australia's car club scene. The content of the book is sourced from Chevron Publishing, the #1 in its category magazine Australian Muscle Car to create a book that's made up of the who's who of Aussie muscle cars & drivers from the last hundred years. ...Show more F1: The Technology, Rules, History and Concepts Key to the Sport by James Mann

Strap yourself in and fill the tank with high octane! Speed Read: F1 is loaded with all the information you'll need to get into the world of blinding speed called Formula 1. You'll get the history of the sport, biographies of major drivers and figures who have dominated the sport in its long and storied history, and a rundown of the incredible technology that makes these cars so fast that they stay glued to the road. You may not guess it, but the world's premiere automobile racing series takes the Formula One name from the set of rules governing the class. Plans for a Formula One drivers' championship were floated in the late 1930s, but shelved until after World War Two. In 1946 the first F1 races were held, but it wasn't until 1950 that the details for a true world-championship series were hammered out. It was a long road from the 1930s to now for this great sport; one marked by glory, championships, iteration, technology, and speed. Don't be intimidated by this incredible culture, dive into F1 Racing today! ...Show more

Race Across the World: The Incredible Story of the World's Greatest Road Race - the 1968 London to Sydney Marathon by John Smailes

In 1968, ninety-eight competitors stormed out of London on the world's greatest automotive adventure, the London to Sydney Marathon, the most ambitious and epic car race ever staged.   Four weeks later they arrived in Sydney-or at least half of them did. The others lay in ruin along its 10,000-mi le route. Unimaginable now in either concept or execution, the marathon captured the rapt attention of the countries through which it passed, and of the world, as it created front-page news. It was more than a car race, more than a rally, more than the trials that opened up outback Australia only a decade before: it was the world's most gruelling test of driver and vehicle.   For Australians, the race became a focal point of the rivalry between local car-manufacturing giants Holden and Ford, as the Monaro Coupe and the iconic Falcon GT went head to head. Neither was to win, but the story of their duel is motor-sporting legend.   John Smailes was a young journalist at the time, covering the race for the Sydney Daily Telegraph. Fifty years after this extraordinary race was run, John's dramatic, compelling and utterly fascinating story-drawing on his own first-hand, eyewitness account and enhanced by in-depth interviews over the intervening years with all the race's key participants-brings the marathon vividly to life. ...Show more "Classics - Great Motorcycles and People"is a coffee table book featuring stunning colour images and detailed histories of iconic New Zealand motorcycles, as well as the people who made them famous. Outstanding pictures by Geoff Osborne, NZ's foremost motorcycle photographer, bring each one to life in a way that has never before been done in NZ. Geoff provides a close look at what makes the bikes ultra-special. Shane Kelly's words bring to life the history of the bikes as well as the people associated with them. Each chapter provides a background that tells why the motorcycles are special, looking at the story of the marque as well as the individual machine. It's not just about the motorbikes but the experiences of the people associated with them. ...Show more The specially commissioned photographs in this book display each Beetle variant model in their full glory. From the military vehicles of the 1930s through the post-WWII cars, up to and including the final German-built model of 1979, this book offers a loving tribute to the car in sumptuous detail. The b eautifully restored and kept cars of each decade are displayed across several double page spreads. Parts of each model are shown in close-up, compared and explained using studio photographs of each model's steering wheels, indicators, engine bays and other aspects of design and function. The history of the Beetle is illustrated using contemporary archive photography, and attention is given to the cultural impact of the Beetle as shown through movies (such as the Herbie franchise), advertising and graphic design. This large format, fully illustrated book presents the Beetle as an object of art, albeit one that starts every time and will run forever on reused cooking oil, with a little modification. Word count: 24,000 ...Show more Get fun facts for kids at your fingertips with DK Pocket Eyewitness Cars. Packed with bite-sized chunks of information that make learning about cars even more fun. Dive into the amazing world of cars, from the first automobiles ever made to record-breaking vehicles and supercars. Read about the many dif ferent types of cars that exist today, from hatchbacks and saloons to hybrids and vintage cars, and even explore the exhilarating sport of car racing. With amazing encyclopedic stats, engaging photographs and genius gem facts, DK Pocket Eyewitness Cars will help you explore cool cars from every era. Perfect for school projects and homework assignments as well as young car enthusiasts, DK Pocket Eyewitness Cars will tell you everything you need to know about cars in one pocket-sized book. ...Show more From the earliest dugout canoes and the boats of the Ancient Egyptians, to the most technologically advanced modern battleships and cruise-liners, this is the ultimate guide to every aspect of the ship, and those who have sailed them.Embark on an epic voyage to find out all about the endeavours of the g reat explorers as they mapped the globe, and see the impact ships have had on trade and industry across the years. Learn about the dramatic historical conflicts in which ships played a vital role, and take a look at seafaring for pleasure and trace fishing through the ages.This new compact edition is produced in association with the National Maritime Museum, and features every conceivable type of sea-going vessel, from caravels and galleons, warships and yachts to clippers and cruise-liners.Previous edition ISBN 9781405353366 ...Show more "Street Art is by far the most controversial art form of our times. It takes place in the street, far away from galleries and at the verge of legality. Nevertheless or maybe because of this, it fascinates and is developing into an art form that increasingly gains acceptance. The sprayed or glued picture s that can be found primarily in big cities on house walls and rail cars are anonymous, provocative, and non-academic. They often, but not always, pick up political protest and sometimes are part of an attempt to bring poetry to the city. This book shows the graffiti's scope of expression in over 250 pictures and explanatory texts. Extra pages illuminate special aspects such as name graffiti, hip hop, or street art vs. globalization. An ideal opus for people who want to learn more about this elementary and controversial art form. ...Show more The great story of the age of the train is told through a wealth of photographs and memorabilia from the collections of the UK's National Railway Museum in York. Covering the development of railway networks in America, Europe, Africa and Asia, epic rail journeys across continents and technological leaps , it is an enthralling ride through the history of the train from the Rocket to the Bullet. Over 200 photographs are complemented by 20 documents that are printed on the pages. Documents printed on the page include: South Eastern Railway's Illustrated Tourist Guide, 1887, including timetable and tourist information for those travelling between London and Paris; Orient Express poster and SNCF marketing material for the launch of the TGV in 1981 and its record-breaking run in 1990. ...Show more Life on the Road - Kiwi Trucking Stories by Randolph Covich

Kiwi truckies are the unsung heroes of New Zealand - the men and women who make great personal sacrifice and often risk their lives to keep our country running. The people who devote their life, in some way or another, to what is often a hard and lonely passion. Life on the Roadgathers together their f ascinating stories. It captures the humour, tragedy, action and extremes of the trucking world, by turns moving between the dramatic, light-hearted and surprising - including runaway trucks, skirmishes with the law, nostalgic tales of the early pioneers, love stories, and more than one practical joke. Whether you're a trucking die-hard or just love the wide open road and a cracking good yarn, Life on the Roadis a gripping insight into the real lives of Kiwi truckies. ...Show more For such a small country New Zealand has a staggering number of hugely impressive motoring collections. Whether it's due to the fresh air, the wide open spaces, the cheap fuel, or just a national fixation with tinkering, Kiwis enjoy collecting and hoarding old cars. Steve Holmes presents some incredible collections in these pages, including a few private collections, and the brand-new Highlands National Motorsport Museum. ...Show more