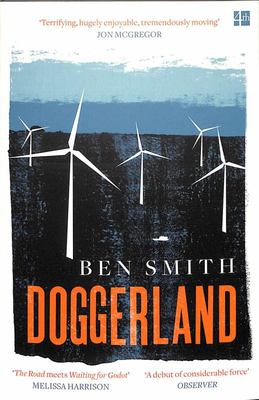 'The Road meets Waiting for Godot: powerful, unforgettable, unique' Melissa Harrison, author of At Hawthorn Time.Doggerland is a superbly gripping debut novel about loneliness and hope, nature and survival - set on an off-shore windfarm in the not-so-distant future. 'His father's breath had been loud in the small room. It had smelled smoky, or maybe more like dust. He had knotted and unknotted a strap on the bag he was holding - he must have been leaving to go out to the farm that day. 'I'll get out,' he'd said. 'I'll come back for you, ok?' The boy remembered that; had always remembered it. And, for a time, he'd believed it too.' In the North Sea, far from what remains of the coastline, a wind farm stretches for thousands of acres. The Boy, who is no longer really a boy, and the Old Man, whose age is unguessable, are charged with its maintenance. They carry out their never-ending work, scoured by wind and salt, as the waves roll, dragging strange shoals of flotsam through the turbine fields. Land is only a memory. So too is the Boy's father, who worked on the turbines before him, and disappeared. The boy has been sent by the Company to take his place, but the question of where he went and why is one for which the Old Man will give no answer. As his companion dredges the sea for lost things, the Boy sifts for the truth of his missing father. Until one day, from the limitless water, a plan for escape emerges... This beautifully crafted novel about loneliness and hope, nature and survival, is as haunting as it is compelling - a very special debut indeed.